Hotline- Be on the look out

A new week has began and lots of ideas are scrolling through my mind.  First of I promised to tell you how you can help on the front lines of human trafficking. 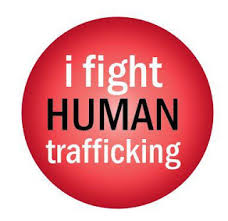 If you come across someone or hear of someone you believe is being trafficked it is really easy to make a difference.  Pick up a phone and call the hotline.  I called the CoNEHT hotline that operates here in Colorado.  It was around 9:30 at night and they answered.  They are 24/7 and are there to help.  I explained the situation that a girl was being pimped out by her boyfriend and she had just been arrested.  We had this small time frame to get her the help she needed.  They gave me the name of a detective that I could work with.  I got a hold of the detective just in time the next morning.  It was said that a pimp was waiting for her to be released.  I never heard back but, this detective assured me no matter what happend in the court she is on his radar and won't be lost for long.

It really is that easy to help.  Just know what to look for, talk to everyone you know about human trafficking and they will come to you.  Polaris Project has a great website on how to educate yourself on what to look for in the united states. They also have a national hotline: 1-888-3737-888. On their website they have seven different fake business to look for.


Some of these make sense now that I mention it.  But the crazy thing is that it can be right in your own back yard.  They don't always hide in seedy parts of town. Let's take a look at a few of these. The girl mentioned above was being held at and Escort Service.  Believe it or not residential brothels can be in really nice parts of town.  There was a really big one shut down in Highlands Ranch, Co which is know as the "family" suburbs.( Denver) (More Denver) Truckers can keep woman and girls against there will in the back of their trucks.  When they are about to pull in to a truck stop they announce they have a "lizard" and start taking bids.

It's sad that my city Denver is one of the fast growing cities.  How did your city rank?  Check out the Shared Hope website and find out.

World Changing by Unknown at 4:15 PM No comments: Links to this post

What is human trafficking and why should you care? 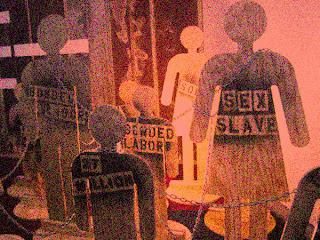 Human trafficking according to the TVPA(Trafficking Victims Protection Act) it is defined as: A) sex trafficking in which a commercial sex act is induced by force, fraud, or coercion, or in which the person induced to perform such an act has not attained 18 years of age; or B) the recruitment, harboring,transportation,provision,or obtaining of a person for labor or services,through the use of force, fraud,or coercion for the purpose of subjection to involuntary servitude, peonage,debt,bondage,or slavery

What?  Can you put that in plain english please?

So here’s the deal.  Slavery still exist and has never went away it just went underground and with the internet it is growing stronger each and every day.  There are a few different types of slaves now days.

Sex Slavery: woman and children, boys and girls as young as five (maybe even younger now) are being forced to service adults in there sexual desires.  They have been lied to,stollen, and sold into sex slavery against their will.  There are many ways one can find themselves as a sex slave but the main point is that this is real.  This is happening.  And it is happening everywhere.  Even in the USA, even in cities like Kansas. Poor Dorothy would be so sad to know what is happening in her town now.  There is no place free from slavery.

Labor: Men, woman,and children who were promised jobs, sold, or stollen have now found themselves trapped in slavery.  They are trapped in horrible conditions and have to work long hours without pay.  Many of the items you purchased today at a “low cost” have been produced by slaves.

Debt bondage: Others are being paid but, as they work or when they were "hired on" they create a “debt” to be paid.  This “debt” is taken from their pay with no hopes of ever getting ahead. They are kept in seclusion from the outside world and their documents are usually taken from them.  Those who have enslaved them make sure they occur debts that they will never be able to pay off or get ahead. Debts from using the bathroom or tools for their job. These debts are then passed down to their children’s children. Creating a generation on slaves.

How many slaves are there?
According to Kevin Bale in his book disposable people there are 27 million slaves that exist today

Hearing these statistics can be overwhelming and can be hard to process.  Creative Abolitionist was created to help everyday people be involved without storming the doors of a brothel.  That is usually the first response of those who hear of little children being forced to have sex with grown men for money against their will.  And I hope some of you will catch the call and go and rescue those little ones.  But, for those of us with little ones at home and who can not dedicate every waking moment to ending slavery I want to present to you ways, even in the safety of your own home, can make a difference. Friday I will be presenting one of these ways.  Make sure you subscribe and follow us to ensure you don't miss a thing.

I’m here to answer your questions, help you process this horrible crime and guide you along the way.

World Changing by Unknown at 2:32 PM No comments: Links to this post

Welcome
to a new
revolution to
End Modern Day slavery


Today is the first day we start a movement that attacks slavery at it’s root : poverty.  Today is also Valentines day a day dedicated to love.  Which makes this the perfect day to start a revolution that requires love to win.  We must love those trapped in slavery so much that we are willing to do what ever it takes to set them free.  Our hearts must break for those trapped in bondage and for those so poor they would sell their little girls to the highest bidders.  Join me in starting a revolution to go against some of the most evil people in this world.  Fight next to me as we fight for those who can not fight for themselves.

This is your mission:
to put an end to world poverty and slavery by teaching trades to impoverished people and by raising awareness on buying habits and micro enterprising

Who you will become:
You can start calling yourself a Creative Abolitionist.  A Creative Abolitionist works towards ending world poverty and slavery in very creative ways.  We believe that poverty is the root of most slavery in todays world.  By teaching skills to create income and through micro enterprising we can make a difference. Wherever we are on the missions field teaching, when we are training, or for those who are called to other beautiful things we are always mindful of how we spend our money.  By raising conscious spenders that say,  “We will not buy slave made products”.  And when life is life, we share love with those around us by creating a beautiful world for all to enjoy.

Definition:
Human Trafficking: is the illegal trade of human beings mainly for the purposes of commercial sexual exploitation or forced labor.

Purpose of this blog is to inform you on what is going on in your own backyard and what you can do about it.  There is a lot to learn about human trafficking and I will be covering as much as I can over the next few months.  But, the most important thing I would like for you to know is that this is a crime that happens right here in America.  There are auctions of slaves going on right in a city near you.  You can buy and trade a person for very little money.  It is not a crime that is only over seas and yes YOU can do something and make a difference.

I look forward to fighting the good fight with you and helping save the lives of millions of children, woman and adults who are trapped without hope.

Make sure you don’t miss a thing and subscribe to this blog by email.  You can also follow us on Twitter , Facebook or Pinterest.  I would love to hear your comments and ideas.  But most of all I would love to help you along your journey of fighting human trafficking.  I’m here to answer your questions, help you process this horrible crime and guide you along the way.

World Changing by Unknown at 12:30 PM No comments: Links to this post